During July an intrepid group of students took part in our biannual World Challenge Expedition. This year took us to South America and the country of Bolivia. Over a four week period students had the chance to enjoy the cultural experience of being in a foreign country, leading the experience for themselves - this is no holiday! They have to source local accommodation, find transport and provide food for themselves as well as take a crash course in speaking Spanish.

During the expedition students took part in a variety of treks, following the same paths that the Incas used many years before them; they started with a warm up acclimatisation walk from La Paz (the world's highest capital city) at 4800m heading downhill towards the Amazon basin taking in the immense scenery of the Yunga National Park. Students engaged in a number of community interaction projects, they renovated a dilapidated primary school classroom in the Yungas by painting walls, doors and furniture and back in La Paz they dressed up as Zebras to help people understand how to cross their busy roads safety.

The main trek of the expedition took everyone to high Altiplano region of the country, even though it was July there was snow on the ground. At an altitude in excess of 5000m, students climbed the summit of Pico Austria - an outstanding achievement for a team of 15 and 16 year olds.

The expedition finished with a 'jeep safari' over the Uyani Salt Flats - the worlds largest salt flat. During the tour people saw live volcanoes, stark landscapes, plenty of llamas, erupting geysers, stayed in a hotel made from salt and took a morning dip in a hot water spring.

The launch of the 2018 World Challenge expedition starts at the end of September 2016.

The performance of students within the Brigg Sixth Form has been excellent ... 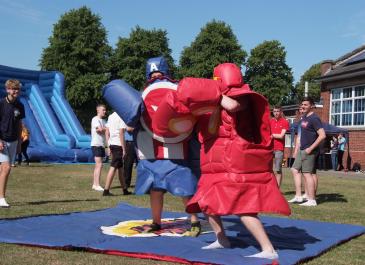 Induction Fun In The Sun

Our prospective year 12 students finished off their two day induction with ...